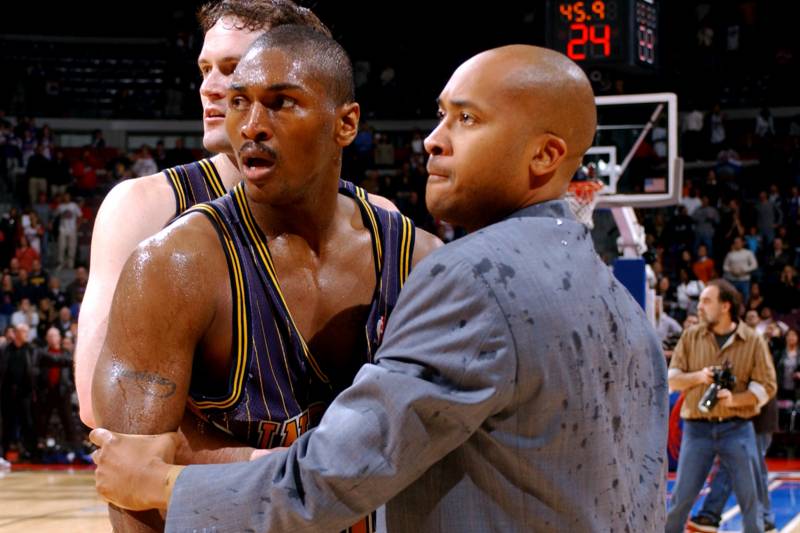 When NBA fans compare different eras, those favoring nostalgia often decry the lack of physicality in the modern game.

Some say basketball has become too buddy-buddy. Others might chime in that every type of contact is a foul today (and nothing is a travel).

While the Association has undoubtedly changed, we’d caution anyone against wishing for a time machine to travel back. Slugfests were actual slugfests back then. No one should want to bring that back to the hardwood.

In remembering the league’s more violent past, we’re revisiting five of the most brutal fights in its history, ranked by the damage done, the chaos created and the lasting impact on the sport. 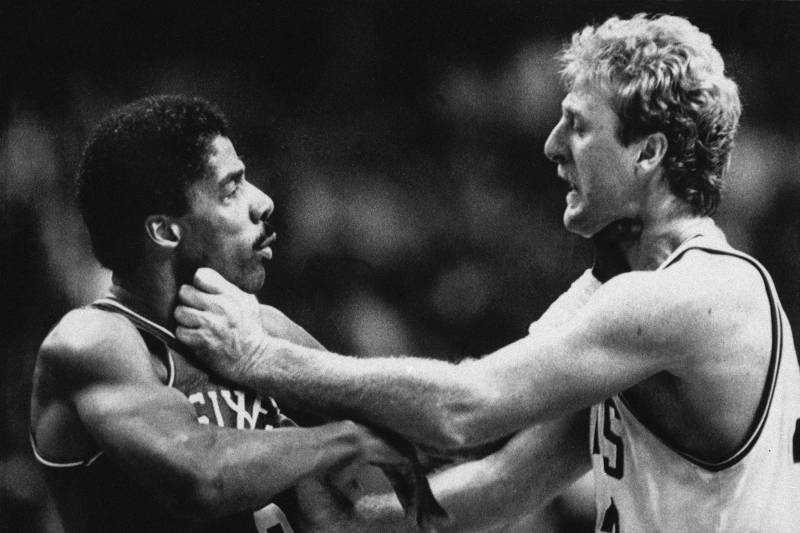 In the early 1980s, the Boston Celtics and Philadelphia 76ers ran the Eastern Conference. One of them represented the East in every NBA Finals between 1980 and 1987, often after ousting the other.

The rivalry was approaching its last leg in 1984, but it still had enough juice to spark a dramatic confrontation between two of the league’s marquee talents, Julius Erving and Larry Bird, during a Nov. 9, 1984 matchup.

Erving explained what transpired during a May 2018 interview on ESPN’s Get Up! (h/t For The Win’s Nick Schwartz):

“So the fight, actually, there was an offensive foul called on Larry. He didn’t like the call so he was really mad at the referee. And he came down court and he was kind of like stomping. He was in front of his bench, and it looked like a moment in which he was going to take a swing. It was very uncharacteristic because, you know, we did Converse commercials together, we did Spalding commercials together, so we were kind of cool. But I thought something was going to happen, because he was definitely mad – but he was mad at the referee, he wasn’t mad at me.

“I just extended my arm to hold him back, and it ended up sliding up to his neck. Then it was on. So it was really inadvertent. I didn’t really mean to grab him by the neck. I pushed him in the chest, hand slid up, got to his neck, he reaches for my neck… Next thing I know, it’s a melee.”

Bird and Erving threw punches. Moses Malone scuffled with M.L. Carr. The benches emptied, and at one point, there was a pile of players on the floor. Referee Dick Bavetta, who was forced into solo duty after his partner, Jack Madden, left with a knee injury, did what he could to restore order.

In all, 18 people were fined for the fight: 17 players and 76ers coach Billy Cunningham. Erving and Bird were the hardest hit with $7,500 fines, the second-largest in NBA history at the time. 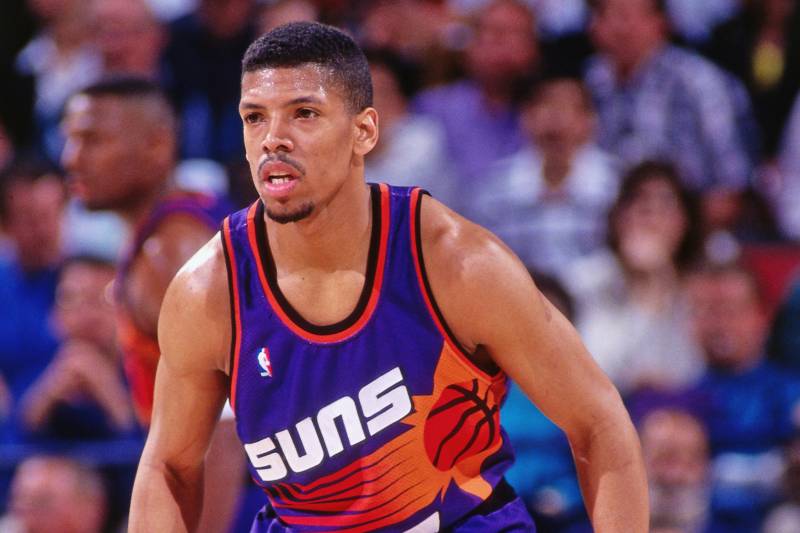 It started as a measuring-stick matchup between the run-and-gun Phoenix Suns and the slow, physical, defense-first New York Knicks. It ended a runaway 121-92 win for the Suns.

But in between, the night of March 23, 1993 devolved into a bench-clearing brawl that resulted in six ejections, 12 technical fouls and ultimately league rule changes that increased the penalties for fighting and leaving the bench during a fight.

The two exchanged words after Johnson deflected an inbounds pass. On the ensuing pass, Rivers bumped Johnson, who embellished the contact and drew a whistle. Rivers got the in the official’s face first, then he went chest-to-chest with Johnson. The benches cleared, but things calmed down before anything got out of hand.

Or so it seemed.

On the next possession, Rivers drew a charge on Johnson and let him hear about it. When the Knicks got it back, Rivers went to screen Johnson, and the Suns point guard lowered his shoulder and planted it in Rivers’ chest. Rivers got back to his feet and raced over to Johnson as the halftime buzzer sounded, with players and coaches from both clubs crowding around them.

Greg Anthony, sidelined with an ankle injury and in street clothes, came over from the bench, exchanged words with Johnson and punched him in the face. Those two went to the floor with a dogpile on top of them. Knicks head coach Pat Riley emerged with his pants ripped.

“I’ve never seen anything like that in all my 27 years in the league,” Suns president Jerry Colangelo told reporters. “It looked like it was going out of control. It got a little scary there for a minute.” 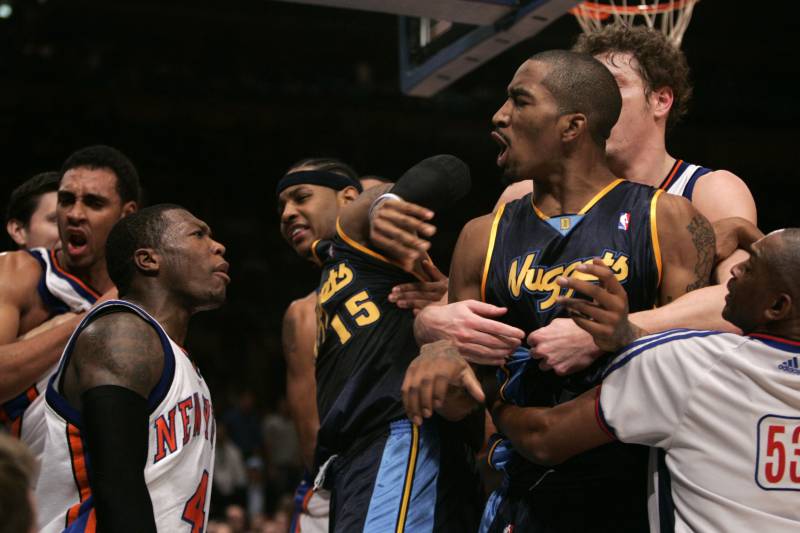 Functionally, Dec. 16, 2006 might have witnessed the NBA’s brawl to end all brawls. It may not have been the most infamous fight, and it’s not the most brutal of all time, but it had ugly moments, and the league’s punitive measures against the participants effectively removed fisticuffs from the sport.

It all started with a hard foul in the final seconds of a blowout home loss for the New York Knicks. They were incensed that the Denver Nuggets still had their starters on the floor.

Knicks head coach Isiah Thomas told Carmelo Anthony that he and Marcus Camby shouldn’t have been in the game and not to go into the paint. Thomas later said the message was, “It wouldn’t be a good idea for you to rub it in and go to the basket and dunk it on our guys.”

Thomas subbed in Mardy Collins, who flagrantly fouled JR Smith shortly thereafter. Smith was en route to an easy transition score when Collins grabbed him by the neck and took him to the floor. Smith got up and immediately started jawing at Collins. Nate Robinson got in Smith’s face. Anthony shoved Robinson, who got tangled up with Smith, and the two spilled into the stands while tussling.

As things seemed to be settling, Anthony floored Collins with a punch. Jared Jeffries chased Anthony to near half court before he was tackled by a Denver player. Smith was on the opposite end of the court from where the fight started before security finally contained him.

It was mayhem—the kind of mayhem the NBA felt it could not afford roughly two years removed from the Malice at the Palace. So, NBA Commissioner David Stern came down with a sledgehammer and suspended seven players for a total of 47 games, including Anthony (then the league’s leading scorer) for 15 games.

“We have set up the goal of eliminating fighting from our game,” Stern said. “We haven’t eliminated it completely.” 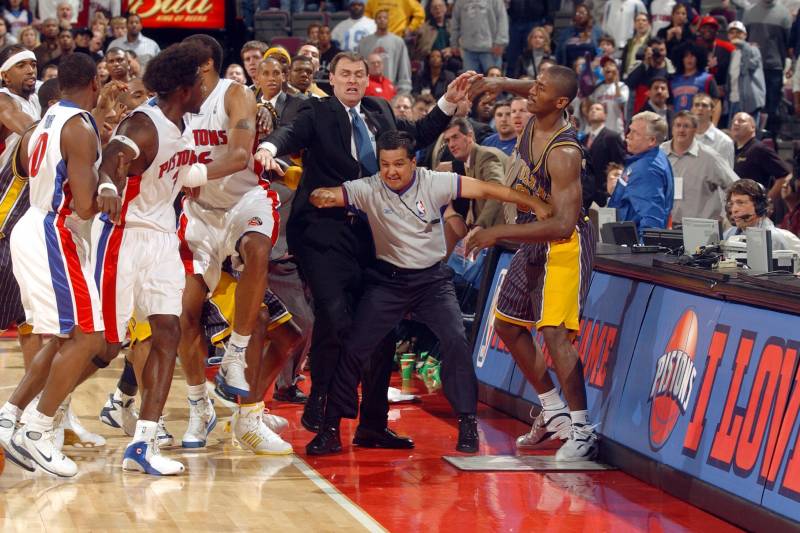 A Nov. 19, 2004 game between the Indiana Pacers and Detroit Pistons was less than a minute from its completion when a hard foul became a shoving match. That shoving match then became the most infamous brawl in basketball’s history.

Pistons big man Ben Wallace attempted a layup when Ron Artest, now known as Metta Sandiford-Artest, fouled him hard. Wallace shoved Artest, both teams confronted each other at midcourt, and the benches emptied.

Artest laid on the scorer’s table, and then a fan threw a beer from the stands and hit him. The Pacers swingman raced into the stands, sparking a scary, ugly fight between players and fans that stretched from the seats to the court and spanned the longest two minutes in NBA history.

“It felt like we were trapped in a gladiator-type scene where the fans were the lions and we were just trying to escape with our lives,” Pacers special assistant to the CEO Chuck Person told Jonathan Abrams for Grantland in 2012. “That’s how it felt. That there was no exit. That you had to fight your way out.”

There were legal repercussions for players and fans. The league levied suspensions that totaled 146 games and $10 million in forfeited paychecks. The NBA also revised arena policies regarding security and alcohol sales.

It was the worst kind of chaos imaginable, but at least it has never been repeated. 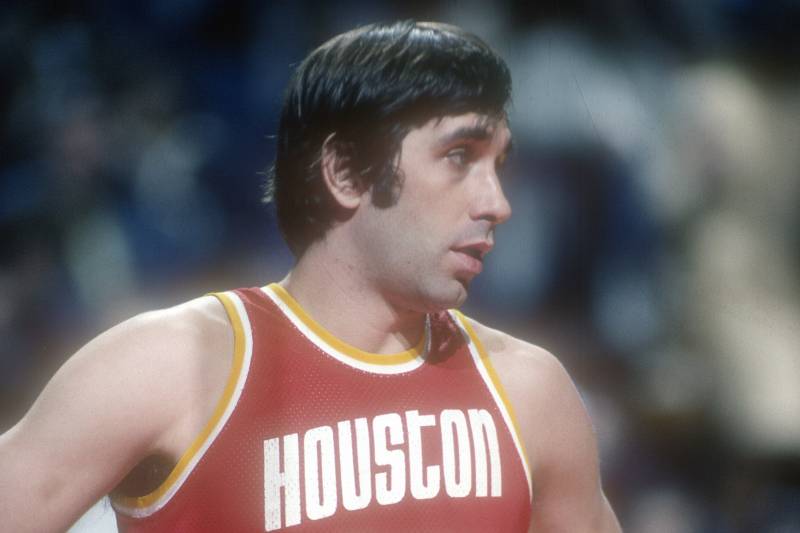 With one punch, the sports world was changed forever.

The night of Dec. 9, 1977 brought about an otherwise anonymous contest between the Houston Rockets and Los Angeles Lakers, but it took an ugly, violent turn in the opening minute of the second half.

Seeing this from afar, Rockets captain Rudy Tomjanovich raced toward the action. Washington saw Tomjanovich in his peripheral vision, stopped, turned, planted and punched him square in the face.

The blow was nearly fatal.

Tomjanovich was hurried to an emergency room where “he was told he might not survive,” Chris Cobbs wrote for the Los Angeles Times in 1985. The total damage done included “a fractured skull, broken jaw, broken nose, other facial injuries and leakage of spinal fluid.”

Washington was suspended for 60 days without pay and fined $10,000. Tomjanovich didn’t suit up again that season, though he returned in 1978-79 to make the fifth All-Star appearance of his career.

“You can’t discuss violence in any sport without thinking about what happened between Rudy and Kermit,” the late David Stern told Cobbs. “It crystallized and focused and forever emblazoned on the consciousness of all athletes what can happen.”