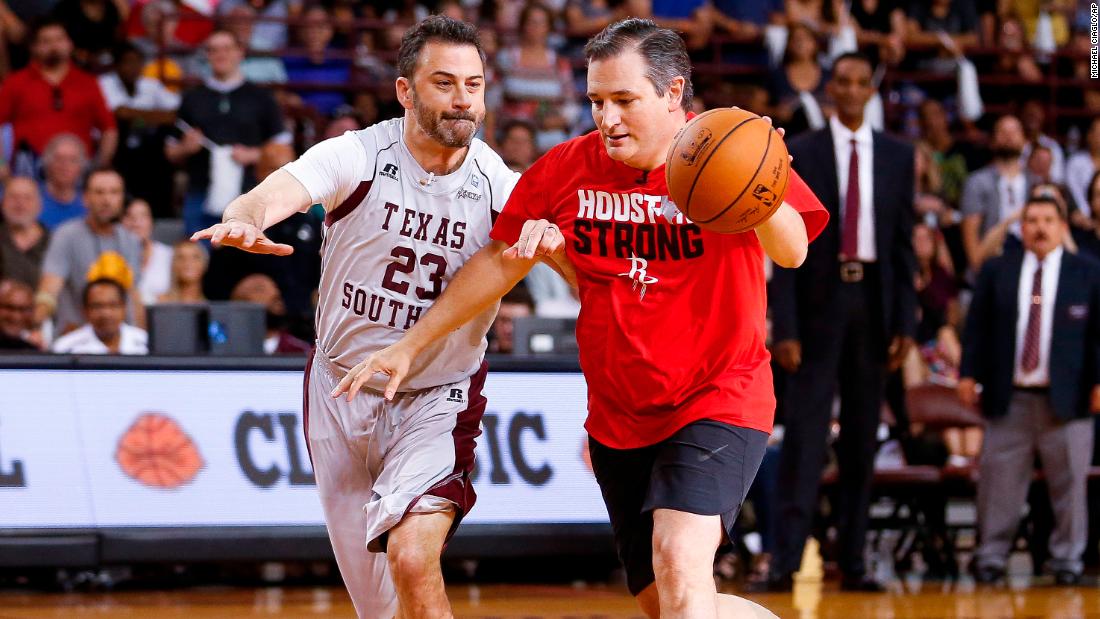 Cruz challenged Kimmel to the charity match after the comic mocked the Texas senator for tweeting a photo where Cruz “looked like a blobfish,” at the NBA’s Western Conference finals. Their scrimmage was deemed the “Blobfish Basketball Classic.”
“Just like a blobfish, the game was sloppy, and within moments we were gasping for air,” Kimmel said on his show Monday night. “We played one on one. It took almost an hour to get to six points — which would be a lot if this was a World Cup soccer game. But it was not.”
However, the real winners, Cruz and Kimmel agreed, were the Texas Children’s Hospital and Generation One, a Houston-based education non-profit. Proceeds from the game — which totaled more than $80,000 — benefited the two charitable organizations.
Here are some game highlights.

It’s rare to see a late-night host and a sitting senator sporting athletic shorts. After all, the two are mostly seen on the Hill and on TV, respectively, meaning it’s mostly suits.
But Kimmel made a dramatic entrance wearing a shorts suit — a fashion statement similar to one rocked by basketball star LeBron James — and big white headphones. He later changed into a Texas Southern University jersey and matching shorts, and walked onto the court with “Final Countdown” blaring on the speakers.
Cruz, meanwhile, sported a Houston Rockets jacket and gray shorts. 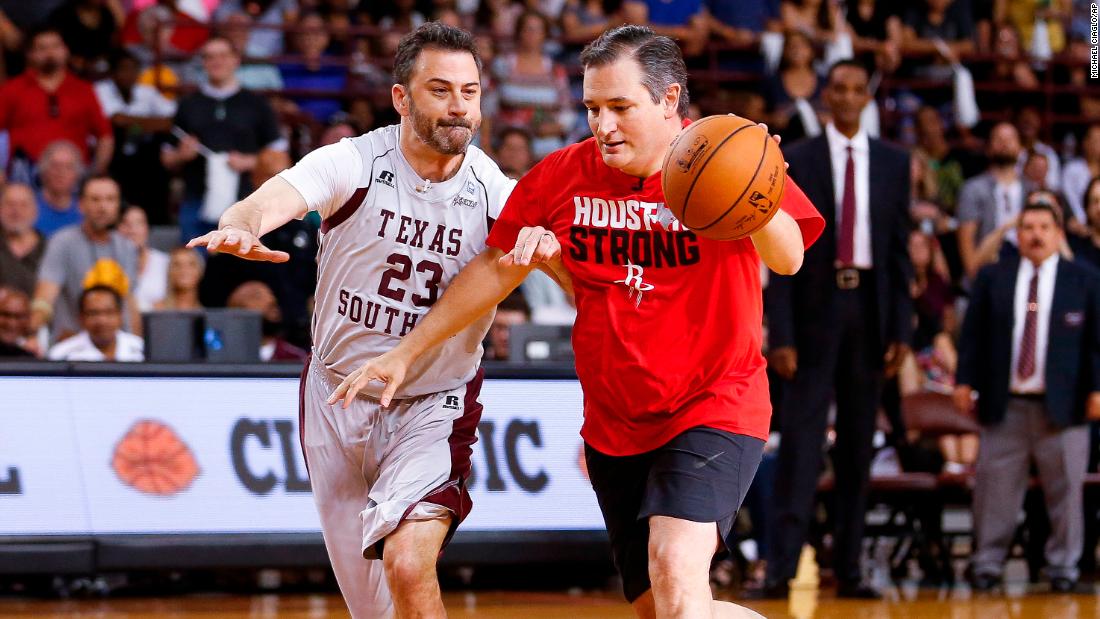 Kimmel, who in the last year has become known for his political monologues, didn’t shy away from taking jabs at Cruz’s politics.
“Did you spend more time this week practicing basketball than trying to get those kids out of that detention center?” Kimmel said, referring to Border Protection’s processing detention centers in Texas, where children are being held and separated from their families.
But Kimmel wasn’t the only one cracking jokes during the game. At one point, Cruz asked “What about all the kids Obama detained?”
Kimmel said: “Yeah, if there were any, you should have done something about that, too.”
Later, when Kimmel said he voted for Hillary Clinton, Cruz replied: “How’d that work out for you?”
“Badly,” Kimmel replied. “Can I be honest? You’re right. It worked out terribly. I mean, nothing has ever worked out worse than that worked out. But I’m glad to see you’ve forgiven Donald Trump for all the horrible things he said about your family, your father. I commend Ted for putting business first and his balls on a shelf somewhere.”

Matching donations in the spirit of bipartisanship

Originally, the two were supposed to play to 15 points. The winner was supposed to win by two, and there was no shot clock and no time-outs. But they quickly realized they wouldn’t make it to 15.
Cruz ended up winning 11-9. At the end of the game, an announcer said that Kimmel had been named the “MVP,” and the comedian was handed a trophy and an “MVP” hat as streamers fell around them.
Emily Miller, a spokeswoman for Cruz, said: “There was no MVP in this game. Cruz won. Kimmel lost.”
Initially, the loser was to donate $5,000 to the charity of the winner’s choice. But Cruz ended up matching Kimmel’s $10,000 donation to each organization.
“I’m going to match you and give 10 grand to both charities as well,” Cruz said.
“You’re a good sport,” Kimmel said in response. “I still think you’re a terrible senator.”
Cruz laughed, and so ended the “Blobfish Basketball Classic.”
UPDATE: This story has been updated with more details about the end of the game and comment from a Cruz spokeswoman.