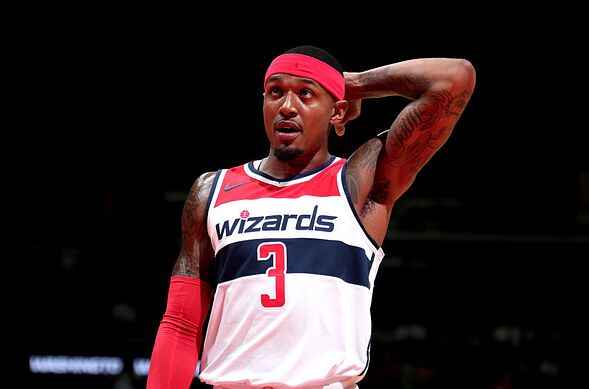 Coming off of a mostly uneventful offseason, expect the Philadelphia 76ers to evaluate many options in an attempt to land a third star. There is one specific situation that the team should monitor closely.

The Philadelphia 76ers failed to land a star name in the offseason, and appear to have no interest in landing angered star Jimmy Butler. While the team can wait to take a chance in landing a star in free agency, there is a situation that may become available over time, via trade.

The Washington Wizards recently did a minor retool of their roster, trying to make their team competitive for their All-Star back court in John Wall and Bradley Beal. The Wizards traded away Marcin Gortat to land Austin Rivers, and landed Dwight Howard in free agency.

So why should you care about the Washington Wizards fan if you’re a Sixers fan?

The Wizards are in a very tough situation; and their window to win with their current roster is closing rapidly. The team also can’t improve via free agency, as they are tied up with contracts; the team only has 5 guaranteed deals next season, however those 5 deals add up to over $110 million in salary.

On top of the talent and salary issue, the team has been known in the past to have rumors of bad chemistry. There has been rumors of a potential rift with Beal and Wall. Adding Austin Rivers and Dwight Howard — two players who have had questions about their character — to a controversial  locker room may just put things over the edge.

If the Wizards don’t improve at all this season expect things to change. There is a great chance that the front office may want to hit the “reset button” and start a rebuild. There is always the possibility that one of their stars may demand a trade, if they see the situation in a bad light for their career.

This is where the Sixers can capitalize on the potential situation.

At this point it seems very clear that the Wizards are fully locked in on John Wall (regardless of if they really want too or not), as he was recently signed to a massive extension paying him $185 million over the next five seasons. A contract, that would be very challenging to move.

If the Washington Wizards wanted to retool their roster it would most likely mean they would be looking for a return on their other star, Bradley Beal.

If the Wizards ever put Bradley Beal on the trade block, the Sixers should make it their number one priority in acquiring the swing man.

Not only is Bradley Beal an all-star talent, the guard would be a perfect fit in what the Sixers currently need. Beal is a three-level scorer, who can play on or off the ball, and defend at an effective rate.

Markelle Fultz is a massive question mark, but there is a chance he can become the player he is meant to be. Even if he does, Bradley Beal would be an excellent fit with him in the back court.

Another advantage in terms of trading for Beal is the fact he’s on contract until the 2020-2021 season. The Sixers would be willing to give up more assets knowing that he isn’t just a one year rental.

So how could the Sixers land Bradley Beal in a trade?