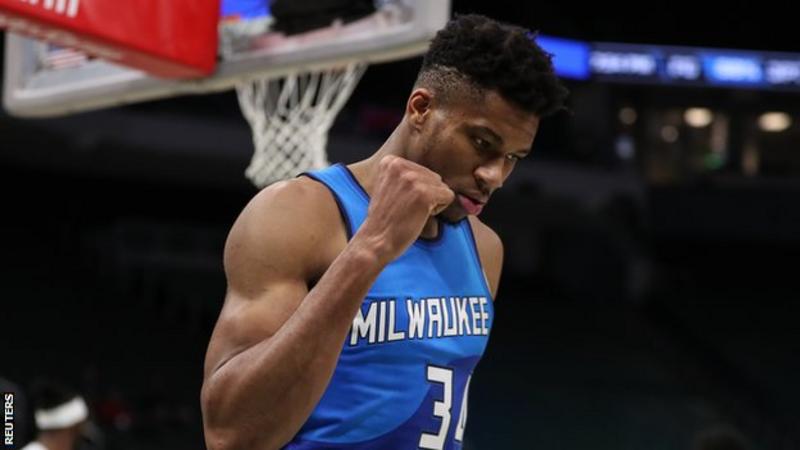 Two-time NBA Most Valuable Player Giannis Antetokounmpo scored 43 points to help the Milwaukee Bucks to a 125-115 win over the Detroit Pistons.

The 26-year-old scored 30 of the Bucks’ 67 first-half points before a superb late block and put-back basket to end the Pistons’ comeback hopes.

The Bucks now have four wins, while the Philadelphia 76ers lead the Eastern Conference on six wins and one loss.

All five Philadelphia starters reached double figures on Monday as they beat the Charlotte Hornets 118-101.

In the Western Conference Stephen Curry followed up a career-best 62-point effort with 30 more in just 31 minutes to propel the Golden State Warriors to a 137-106 win over the Sacramento Kings.

The Dallas Mavericks won a Texas tussle with the Houston Rockets with help from Luka Doncic’s first triple-double of the season.

It was the 21-year-old’s 26th career triple-double and after a perceived slow start to the season for Doncic, coach Rick Carlisle said: “You can see that he’s getting better and better as each day goes by.”

Jayson Tatum scored 40 points as the Boston Celtics overcame a 13-point first-quarter deficit to win 126-114 at the Toronto Raptors.

Payton Pritchard contributed 23 points and eight assists for the Celtics, who moved their record to five wins from eight.

In the tightest game from Monday night’s fixtures, Malcolm Brogdon lofted home a 12-foot floater with 3.6 seconds of overtime remaining as the Indiana Pacers secured a 118-116 win over New Orleans Pelicans.

Victor Oladipo scored 25 points on the night as the Pacers moved third in the Eastern Conference with five wins and two defeats this season.

The New York Knicks erased a 15-point third-quarter deficit to win 113-108 at the Atlanta Hawks. Julius Randle top-scored for the Knicks on 28 but a late three-pointer by Austin Rivers was key as they moved to four wins from seven games.

“We didn’t play great but we found a way to win,” Knicks coach Tom Thibodeau said.

Elsewhere, the Miami Heat overcame the Oklahoma City Thunder 118-90 and Aaron Gordon put away six three-pointers for the Orlando Magic as they beat the Cleveland Cavaliers 103-83.

Rudy Gobert says he has 'no beef' with Shaquille O'Neal...