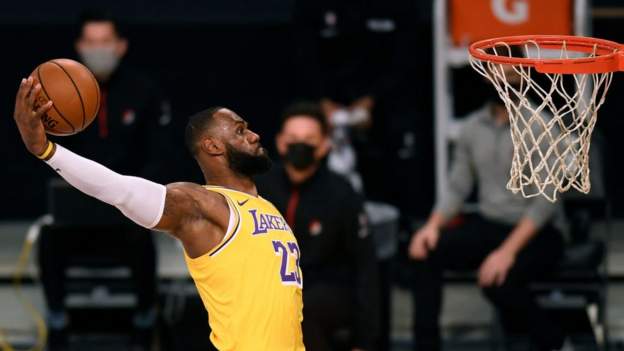 NBA champions the Los Angeles Lakers lost for the second time in their opening four games of the new season as Damian Lillard inspired the Portland Trail Blazers to a 115-107 victory.

But Lillard’s 31 points were supported by 28 from Gary Trent Jr as Portland made it two wins from three matches.

“I thought we came out with great energy,” said Lakers coach Frank Vogel.

“When they made their runs we weren’t able to sustain the energy we began the game with.”

Elsewhere, the Detroit Pistons fell to a third successive defeat as the Atlanta Hawks made it three wins from three with a 128-120 victory.

Jerami Grant and Josh Jackson both hit 27 points for Atlanta as Pistons coach Dwane Casey chose to rest key players in Blake Griffin and Derrick Rose early in the campaign.

“We didn’t want to run them to the ground because of the back-to-back. That’s the reason,” said Casey.

“I don’t want to say this is going to be the plan throughout the year. Their bodies and how they feel will lend a lot to how we want to do it.”

The Memphis Grizzlies’ first win of the season came at a cost as Rookie of the Year Ja Morant limped out with a sprained ankle in the first half of a 116-111 overtime success over Brooklyn Nets.

Morant – who averaged 36 points in the first two games of the season – was taken from the court in a wheelchair and watched the closing stages in a protective boot as Kyle Anderson drained three of four free throws late in overtime to amass 28 points in all.