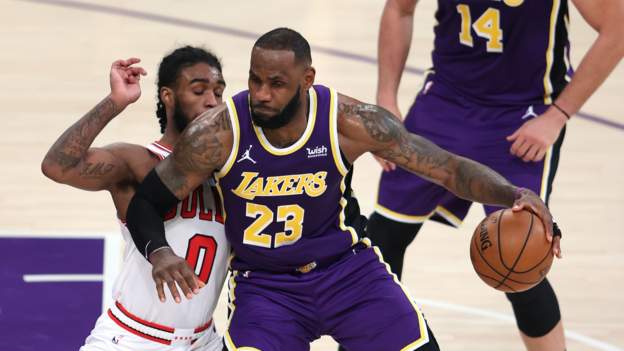 Zach LaVine top-scored for the Bulls with 38 points, 19 of which came in the first quarter.

The Warriors netted 20 three-pointers to avenge their defeat by the Clippers on Wednesday, bouncing back from 22 points behind to secure their fifth win in seven games.

“They kept their energy up. They kept their spirit up. They were pumping each other up on the sidelines. It just felt like we were on the ropes, but we hung in and that’s what matters.”

The Boston Celtics won their sixth game in seven as they saw off the Washington Wizards 116-107.

Jayson Tatum scored 32 points while Jaylen Brown added 27 to leave the Wizards bottom of the Eastern Conference with just two wins to their name.

One place above are the Detroit Pistons, who took a slender 110-105 victory over second in the Western Conference Phoenix Suns, while the Toronto Raptors also won with a 144-123 result over the Sacramento Kings.

Zion Williamson scored 26 but could not prevent the New Orleans Pelicans from slipping to a 118-110 defeat by the Charlotte Hornets.

Six Hornets players hit double figures in what was a third straight defeat for the Pelicans in a four-game homestand.

The Memphis Grizzlies ended a five-game home losing streak with a 115-110 win over the Brooklyn Nets, while James Harden and Christian Wood both recorded double-doubles as the Houston Rockets defeated Orlando Magic 132-90.

Utah Jazz made a franchise-record 25 three-pointers in their 131-118 win over the Milwaukee Bucks, while Hamidou Diallo scored a season-high 23 points as Oklahoma City Thunder beat the New York Knicks 101-89.

Lakers' Anthony Davis knocks over cart, calls out defense after...