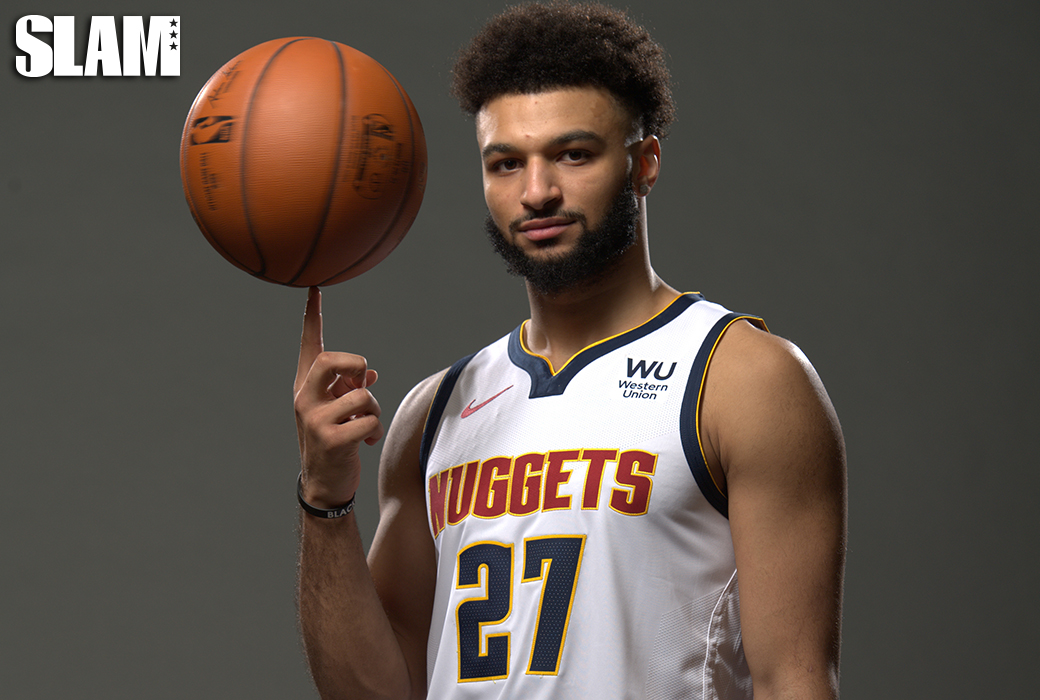 Murray starts to sing when it’s time to raise up. The hop into his shot is consistently on-beat and it comes with perfectly squared shoulders like he’s leading an orchestra. The shoulders give way to a dipped-in-honey follow through that he leaves up even after the nylon dances to his music. His whole game is a concert in which his mind and body take turns leading the jam session.

It’s regular to hear him play different songs. Sometimes he’s calm, providing the backing track for his teammates. That’s when he moves in chords, within structures that keep the timely groove. Sometimes he’s aggressive, living in the solo section of the song, crashing through with long-distance shots that squeal like a bent guitar string and dribble combos that happen so quickly they look like furious scales up and down a keyboard. Sometimes he trades off. He’ll start a song in the background and then take over at the end with his own version of a G#7 note (Hiiiii, Mariah Carey).

His music, of course, swelled to a deafening crescendo during the Orlando bubble. The volume was all the way up to 11 and every single chord or note he played was pitch perfect. His mechanics were all so finely tuned that he created the highlight reel equivalent of a no-skip album. The most incredible part is that he went prime Nas/Drake/J. Cole when it mattered most. He shined brightest when the lights were blinding—in the clutch.

Now that everybody’s listening, it’s an ideal moment in the Ballad of Jamal Murray to remind the world that this is nothing new. Just because it was loud in the bubble doesn’t mean it hasn’t been happening for years and years.

“I wouldn’t say I’ve changed,” Murray calmly tells SLAM. “Nah. I’ve adjusted a little bit, coming from Canada as well, different country, being alone. I just let basketball express myself. Not many people know me or talk to me or I give them the time of day to have a full conversation but when you see me on the court, that’s my way of being myself and just expressing myself and showing what I’ve been practicing and doing for the past 23 years. I’ve been playing since I was a little baby. This is what I want to do. When I’m playing well, that makes me happiest the most.”

The Kitchener, Ontario, native isn’t just another kid coming from Canada. He’s the kid coming from Canada. He could’ve been out to a prestigious American prep school when he was dominating high school ball up north and finished in front of more mixtape videographers. But he made a choice that no one else before him had been brave enough to try and he decided to stay home. And in doing so he was the final piece in opening Canada’s doors to the world of college and pro scouts.

Maybe that’s why his performances in the bubble were so unbelievable to so many. There aren’t many American hoop fans watching Canadian high school basketball.

But that’s not a good enough excuse because that was over five years ago. There was definitely enough time to catch up on a high-volume shotmaker that played collegiately at the University of Kentucky and made it a habit to put up 20-spots while with Big Blue Nation. No? Too many one-and-dones over there to remember?

He had to have been on the national radar when the Nuggets grabbed him with the seventh overall pick in 2016. Or when he took home that season’s first Rookie of the Month trophy in November. Or when he won the MVP of the 2017 Rising Stars Game with nine three-pointers and 36 points. Or even when he made the All-Rookie second team that year. There was that time that he gave Kyrie Irving and the Celtics a 48-point performance in 2018. Devin Booker and the Suns couldn’t stop him from getting 46 a few weeks later. The 2018-19 playoff numbers don’t lie either. Averages of 21 points on 42 percent shooting in 14 contests as a 22 year old should’ve gotten him the proper amount of buzz.

Guess those mountains out in Denver are too high for the national media.

He went supernova in the 2020 playoffs, a thundering roar that people in Denver, Canada and everywhere in between heard. Checks out that’s when everyone would check him out. The 26 points per game on 50 percent shooting is already nasty. But his six games of at least 30 points, with four of those reaching at least 40 and then two of those reaching 50, shouldn’t be all that surprising to those who have been paying attention. His trajectory has always been trending towards ascension.

Murray’s a 6-4 guard that can post, drive to the rim, hit pull-ups off the bounce, laser catch-and-shoot threes and nail free throws with his eyes closed. That last part isn’t hyperbole. YouTube it. He can go from throwing the ball off the backboard to himself to carving up defenses with the pick-and-roll to surveying the floor like prime Steve Nash with that famous wheel dribble. He’s got the handle to create his own shot and the IQ to lead a Nuggets offense that is symphonic in nature. His competitiveness, by far the most fun part about him, borders on threatening. He will rip out the figurative heart of whoever’s standing on the other side. He’s a throwback to all those who had the fearless takeover trait of the no-friends 1990s NBA. He cherishes competition.

Murray uses the word “express” when asked about the game. Life is creativity to him. That’s why it looks like there’s music in him when he’s on the floor.

“I think anything that you try to practice or perfect is just art in general,” Murray says. “When you watch people dance, any type of performance—when you watch them sing—there’s an art to it, there’s a passion that comes with it as well. When I’m fighting, I’m doing kung fu, a fadeaway is like a kick. My shot’s like an arrow. The way I go into a punch is the way I drive. It’s the same kind of mentality in terms of what I’m trying to do on the court. I just always think that everything I do, if I’m running track, football, if there’s any type of competition, I’m always trying to be the best at it, I’m always trying to do my best. There’s no in-between with me. When I watch some highlights and I see myself do a fadeaway, it’s the same form as a kick in kung fu, especially when I jump high. I don’t know,” he laughs. “I have a different brain. I be thinking different.”

Murray says “different” here like it’s a bad thing. But his version of “different” is reflected only in the fact that the things that make him different are the same things that so many people don’t understand about him.

He’s practiced mindfulness and meditation since he was very young, under the guidance of his father, Roger. His pops has studied Bruce Lee for decades and he started showing Jamal the icon’s movies at a very young age. It’s scary how quickly Jamal identified one of Lee’s quotes during our interview. His examining of Lee is how Murray is able to connect the form of his fadeaway to the form of his kick. And Murray’s always been down to expand his mind and his spirit. It’s been that way forever.

“Just repetition, just over and over and him not getting tired of me getting tired of hearing him,” Murray says of the early days of his mindfulness practices. “Greatness doesn’t come easy. It takes being uncomfortable more than you think. And doubting if you’re going the right way. And [my dad] just wanted me to listen. I think that was the biggest thing. He said, ‘Give me your ears and if you listen to what I’m saying, it’ll help and you can actually see what I’m trying to say. As you get older you’ll understand and have a broader perspective of things that are happening and then you start to see the results and then you try to learn as quickly as you can.’ I just try to keep that understanding of my game and how I can score and what’s worked best for me. I just try to build on that. I just try to keep building every single day.”

The next building block is another deep run in the postseason so it’s a good time to take one more look back at his remarkable work in the bubble.

“Passion,” he says, is the singular word that comes to mind when he thinks about that chapter in his life.

“Just being in the bubble, being on lockdown, not being able to have any distractions and just focusing on game-to-game and with everything going on, I just felt like I didn’t have to think or do anything but play basketball,” he continues. “And that was where I thrived in. It’s just trying to carry that same energy, that same mindset and doing the same thing here in Denver or wherever we are on the road. But we were there for so long and it was like, ‘Ok, I’m here for basketball. I might as well just give it my all every single night.’”

That’s how he’s approached his whole career so far. It’s just that you finally started watching. He’s increased his points and assists averages in all four seasons he’s played in. He’s gotten to the Western Conference Finals when nobody thought he or the Nuggets could. You honestly should’ve seen this coming.

“Just playing my game, just part of the free-flowing spirit that I am,” he says. “Different pace, different tempo. I like to find different rhythm.”

James Harden reminds other NBA teams why they should trade...