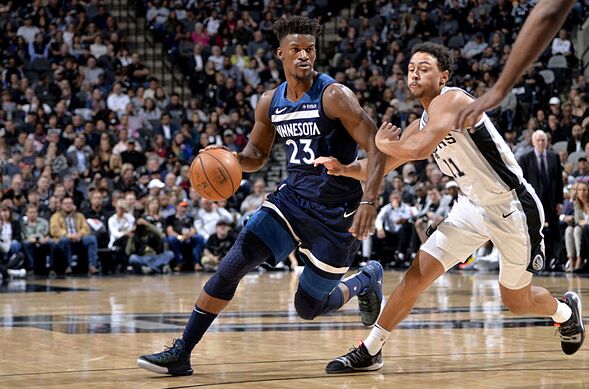 Minnesota Timberwolves 4-time All-Star Jimmy Butler wants out of Minnesota and we have three ways the team can increase his trade value.

It’s no secret by now that Jimmy Butler wants out of Minnesota. The Minnesota Timberwolves surprisingly haven’t traded the All-Star and it was expected that Butler would’ve been traded by now with all the drama that’s happened in the Twin Cities over the past few months.

However, when Tom Thibodeau is the head coach of a team, you can expect things to be a little more complicated – especially when he’s dealing with an ex-Chicago Bull. Could the Wolves be increasing his trade value by not trading him, yet?

Sure, it would be nice to get this over with and see what trade package the Timberwolves could get back, but maybe keeping him increases their offers.

We’ll explain that later in the article.

During the 2016 Draft night, the Wolves trading away Zach LaVine, Kris Dunn, and the 7th overall pick (Lauri Markkanen). In return, they received Jimmy Butler and the 16th overall pick, whom they selected Justin Patton with – which could turn out to be one of the worst deals in a while if Butler isn’t moved for some pieces soon.

Butler is entering his second season with the Timberwolves and his eighth in the NBA. Moreover, last season he helped the Wolves end their 14-year drought from the playoffs. In an effort to do that, he put together an All-Star season averaging, 22.2 points, 5.3 rebounds, 4.9 assists and 2.0 steals.

When looking at Butler’s game, it’s clear that he’s the alpha dog. He will get after you and play as hard as anyone in the league. Sometimes that backfires on him, as he’s had a hard time staying healthy.

Now that the 2018-19 season has begun and Butler is still on the Timberwolves roster; Minnesota will look to find ways to win games while also increasing his trade value.

Here’s three way’s the Wolves and Butler can do this, and maybe ways that Minnesota can help get him there.