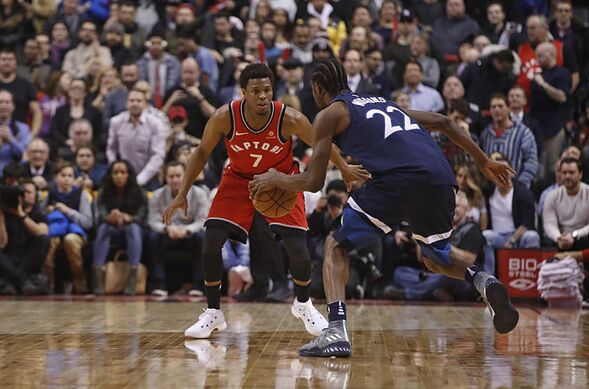 TORONTO, CANADA – JANUARY 30: Kyle Lowry #7 of the Toronto Raptors plays defense against the Minnesota Timberwolves on January 30, 2018 at the Air Canada Centre in Toronto, Ontario, Canada. NOTE TO USER: User expressly acknowledges and agrees that, by downloading and/or using this photograph, user is consenting to the terms and conditions of the Getty Images License Agreement. Mandatory Copyright Notice: Copyright 2018 NBAE (Photo by Mark Blinch/NBAE via Getty Images)

Coming off a home win against the Indiana Pacers, the Minnesota Timberwolves will be on the road playing the Toronto Raptors who are looking to win their fifth straight game.

The 2-2 Minnesota Timberwolves are hoping to end the undefeated Toronto Raptors winning streak, at all costs.

In the Wolves last win against the Indiana Pacers, there were some favorable stat lines for the team at large. We saw all three guards in Jeff Teague, Tyus Jones, and Derrick Rose produce nice numbers – although all three inefficient at times, as our own Ben Beecken states here.

But most of all, we saw a resilient performance from the Wolves in the fourth who outscored the pacers by double digits, they are going to need more of that resiliency tonight.

The Raptors are coming off a historical season last year, surpassing any season record they’ve had in the past. And without hesitation, traded away – questionably – their best player of all time in DeMar DeRozan for Kawhi Leonard, as well as firing the 2017-2018 Coach of the Year recipient in Dwane Casey.

The Raptors are going down a new road of not caring what other people think of them and that road could be bumpy for their opponents.

Leonard has been playing like an MVP as of late and will look to continue that appearance tonight when defended by Jimmy Butler and Andrew Wiggins. However, Wiggins is a game-time decision with a groin injury, our sources have told us that we won’t know that outcome until this evening.

Aside from Leonard and a new coach in Nick Nurse, this team is obviously well constructed from bottom to top. Here are some of their best qualities as a unit thus far in the season:

As you can tell from above, this team is stacked all around and has a lot to do with the way they’ve been built. But enough about Toronto, what is Minnesota doing well thus far?

As you can see, both teams are really impressive – but it’s Toronto who’s been getting the limelight due to their acquisition of Kawhi Leonard and their team depth.

What Minnesota needs to hone in on is the ability to steal the ball and score in transition – which isn’t easy against Toronto who have one of the best teams in terms of not turning it over.

All-time, the Raptors are 29-15 against the Timberwolves, which isn’t saying much in terms of tonight but it’s interesting to note that the Raptors could literally own the franchise by winning this evenings game which would give them twice as many wins as the Wolves have against the Raps.

I feel as if I’ve been more gloom than anything in this post and our 3 things to watch for in this game will most likely continue down that road, unfortunately.

Here’s our first thing you need to watch out for (which tends to be every teams first thing).